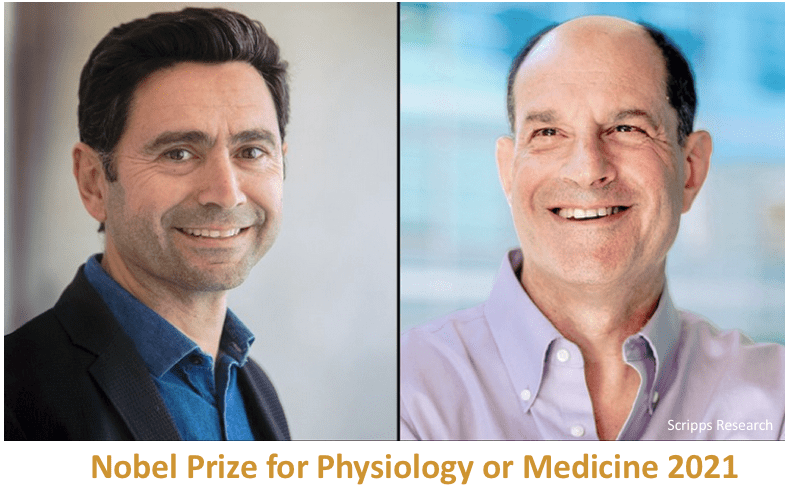 Congratulations to David Julius (right) and Ardem Patapoutian (left) for winning the Nobel prize for Medicine 2021.

“For their discoveries of receptors for temperature and touch”

David Julius at the University of California, San Francisco, saw the possibility for major advances by analyzing how the chemical compound capsaicin causes the burning sensation we feel when we come into contact with chili peppers. How capsaicin actually exerted this function was an unsolved riddle. Julius and his co-workers created a library of millions of DNA fragments corresponding to genes that are expressed in the sensory neurons which can react to pain, heat, and touch.  They expressed individual genes from this collection in cultured cells that normally do not react to capsaicin. After a laborious search, a single gene was identified that was able to make cells capsaicin sensitive. The gene for capsaicin sensing had been found!

Ardem Patapoutian, working at Scripps Research in La Jolla, California, wished to identify the receptors that are activated by mechanical force.

Patapoutian and his colleagues first identified a cell line that gave off a measurable electric signal when individual cells were poked with a micropipette. In a next step 72 candidate genes encoding possible receptors were identified. These genes were inactivated one by one to discover the gene responsible for mechanosensitivity in the studied cells. Patapoutian and his collaborators succeeded in identifying a single gene without which rendered the cells insensitive to poking with the micropipette.

A new and entirely unknown mechanosensitive ion channel had been discovered and was given the name Piezo1, after the Greek word for pressure (í; píesi).

Pain management is a huge area of interest and investigation. Researchers are now looking at these new discoveries, to see if proteins can be found that could modify TRPV1 or Peizo1 and hence manage chronic pain conditions.

You can get your marketing message in front of experts like David Julius and Ardem Patapoutian.  Use our Physiology, Medicine or Cell Biology disciplines, or perhaps target using a Protein research interest.

Nobel Prize® is the registered trademark of the Nobel Foundation

Please get in touch and let us know what you need. Useful information includes any custom searches or what roles, markets and skills are of interest. Any extra information you can provide will help us create the best email list for your requirement.

We look forward to hearing from you.

Get the most from your email campaign. Check out our marketing hints and tips pages on improving open rates, click rates, avoiding the spam folder and many more.