Widely regarded as the father of modern Physics, Galileo’s birthday was the 15th February 1564 in Pisa, Italy.  Almost becoming a musician or a catholic priest, Galileo chanced upon a maths lecture at university and became fascinated with the subject. He strived to explain nature with mathematics for most of the rest of his life.

A few years earlier, the first very basic telescopes were created. Galileo hand made and greatly improved the optical performance. For example, whereas previous observers has remarked that the moon had a patchy surface, Galileo was able to see the cause – craters and mountains.

Galileo was famously the first to observe that Jupiter had four moons. Something the author was unable to repeat with a modern Newtonian telescope in September 2021. Light pollution was probably the main reason for lack of success.

Galileo went on to observe the rings of Saturn and even Neptune, although he lost track of it and failed to realise it was another planet.  Neptune would remain unknown until 1846. 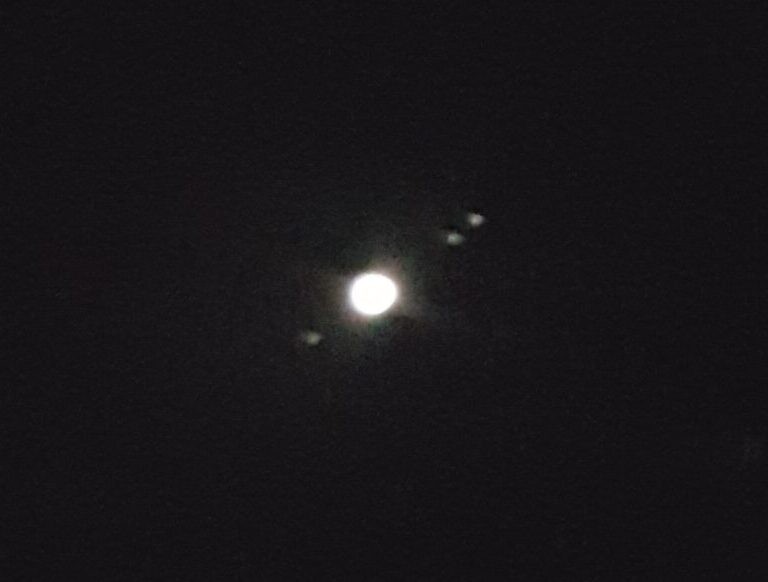 Galileo used the scientific method to test theories. He worked with pendulums and discovered the relationship between the length of a pendulum and the swing period.  He famously experimented to show that how fast an object falls is independent to its mass. Although there is doubt if he did drop different objects from the Leaning Tower of Pisa, remarkably, NASA repeated his original experiment on the surface of the Moon. During Appolo 15’s mission in 1972, astronaut David Scott dropped a hammer and a feather in his honour.

Galileo calculated the relationship between the density of a liquid and its temperature, however the thermometer that bears his name was created by his students and only named in his honour.

Galileo’s early work on motion was influencial for later work by Newton and later Einstein.

Galileo’s astronmical observations led his to conclude that Copernicus was right and that the Sun was the centre of the universe. This took him into direct conflict with the then powerful Catholic Church and for the last years of his life, he was under house arrest for his “crimes”.  The Vatican finally permitted his work to be published in 1835 (previously it had to be smuggled out of Italy). It wasn’t until 1992 that the Vatican finally apologised for his treatment.  In 2008 the Vatican planned a statue to be erected in his honour, however the plans were short lived and were shelved soon after.

Albert Enstein called Galileo the father of modern science, words that Professor Steven Hawking echoed more recently. So raise a glass, or drop a feather in honour of Galileos birthday!

Get your message to those following in Galileo’s footsteps in the worlds of Physics, Nanotechnology and Material science, with a direct email marketing campaign.